Set on the top of the mountain the village of Erice gives the visitor a medieval atmosphere, breathtaking views of all the western Sicily and gastronomic delights. Do not miss the Balio (garden) with the adjoining Castello di Venere, the Church of San Giuliano (now home to the Mysteries of Erice), the Chiesa Madre, the Church of San Martino and the Museo Cordici

The village of hundred churches

Religious buildings are often considered among the main attractions, especially when you decide to do a type of tourism focused on the history and culture of the place you go to visit.

This speech is very valid for Erice, since in ancient times it was known as ‘the city of a hundred churches’. Currently the churches open to worship are much less than a hundred, but still today they are numerous and are important testimonies of the past.

The first cult building to visit in the tour of the churches of Erice is surely that of the church dedicated to Santa Maria Assunta, of very ancient construction and fundamental place of local religiousness. There are many others, however, the ancient churches worthy of being seen both for their ancient building and as a treasure chest of artistic treasures: the churches of San Martino, San Cataldo, San Giuliano and San Giovanni Battista are just some of the names to refer to. 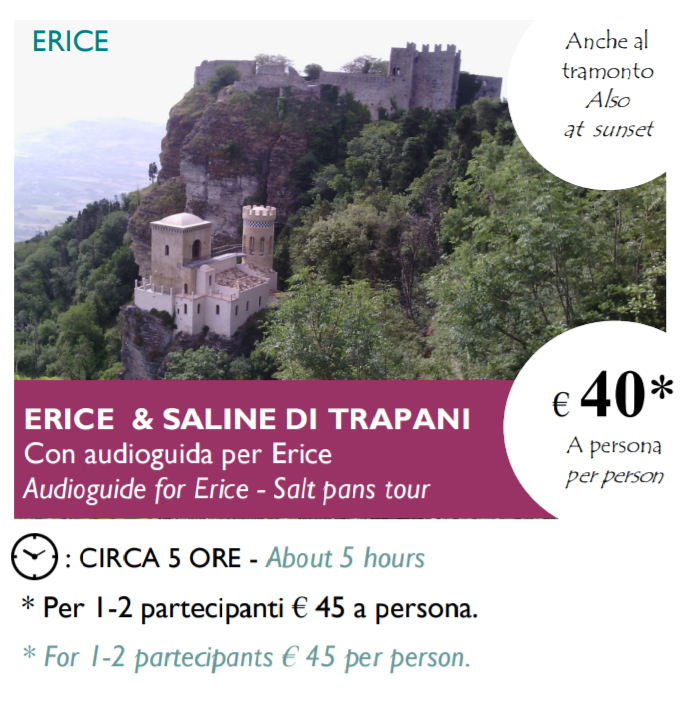 Segesta, a small archaeological site, where you can admire an impressive Doric style temple, still standing as it was left (incomplete).

On the Monte Barbaro you can visit the ruins of the city, while on the hill it is possible to reach (also by means of a shuttle bus) a theater, partly excavated in the hill, from which it is possible to admire a wonderful panorama. 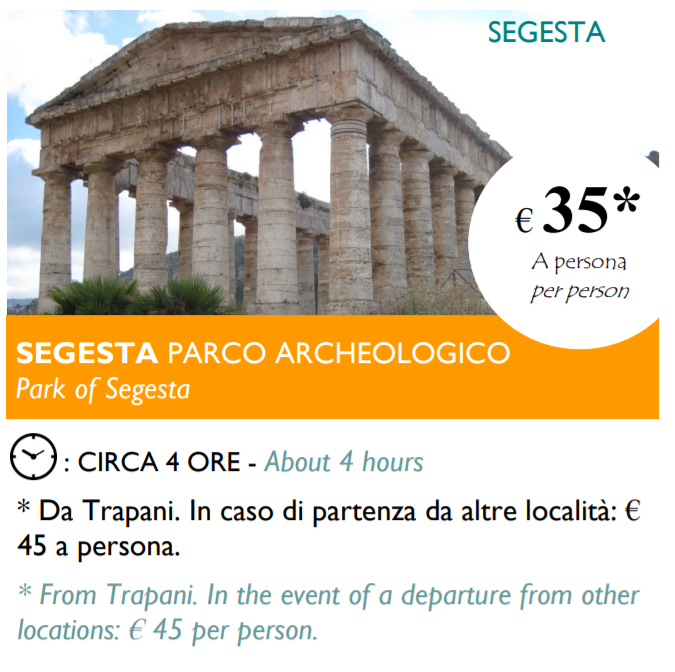 Walk to the cable car

To get off the hill on which Erice is located there is the cable car and it is not necessary to use the car. But there is also the possibility to make an interesting excursion and return on foot.
It starts at the foot of the cable car (now small cabins) and following the path meter by meter you go down from 800 meters to 0 in about an hour.
The percorpo of the excursion is beautiful; it is also safe to go there with friends, help each other to find the best path and when you find a breathtaking view you can stop to admire it, while tasting fresh sandwiches and biscuits, cooked in wood-fired ovens as they once were.

Sea, sun and crystal clear water, relaxation, entertainment and good food. Cus Cus with fish and the famous “caldo Freddo” ice cream with almond and tonnara granita. 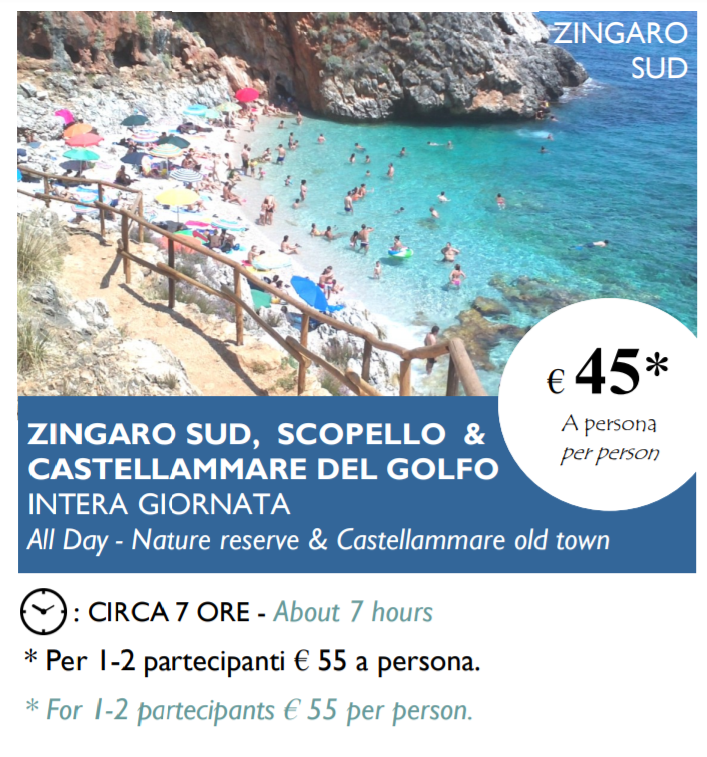 Visit of the Ettore and infersa salt pans and of the windmill. Possibility of boarding for the island of Motya and visit of the Mseo whitaker, fortifications, thopet, Cathon.

Panoramic tour and stop in one of the most famous Marsala wineries with typical wine tasting. 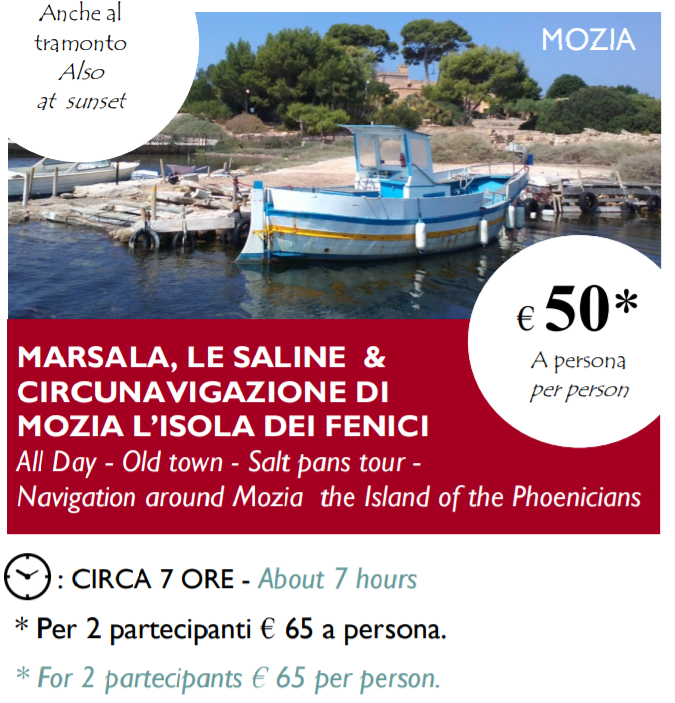 Panoramic tour and stop in the beautiful coves with the wonderful view of the famous Faraglioni. 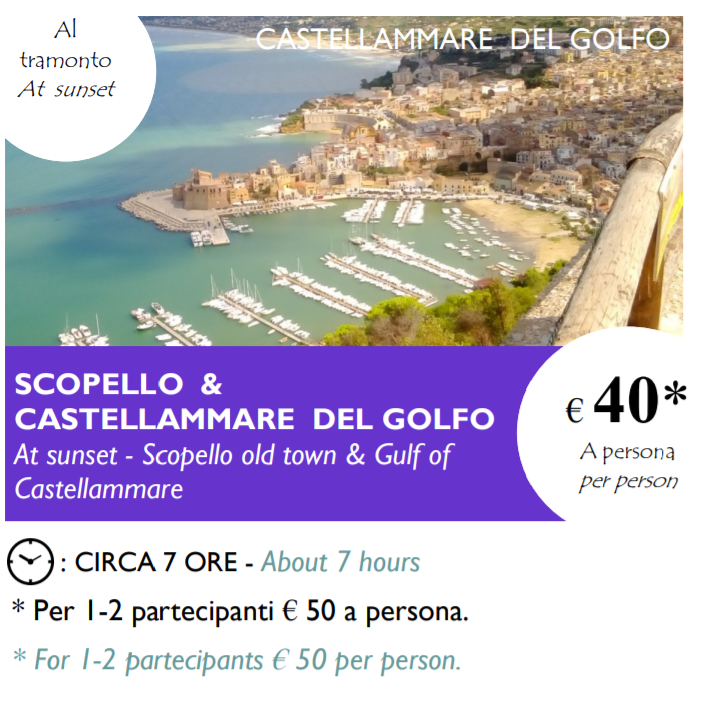 City of Palermo (from the greek Pan-Ormos “all port”), the capital of the Sicilian region, is considered the cultural and economic nodal point between the Mediterranean Sea and Europe. For this reason, in the past it was a land of conquest of the Sicans, the Cretans, the Elymians, the Greeks, the Phoenicians, the Romans, the Byzantines, the Arabs, the Normans and the Swabians, the Angevins, the Aragonese, the Spaniards and of the Austrians. All these peoples have left monuments and extraordinary remains. The original core of the city was founded between the watercourses of Kemonia and Papireto. In the ninth century d. C. with the Arabs, the city defined “paradise of the earth”, acquired splendor. The Castello della Zisa, the Castello di Maredolce and the Parco della Favorita bear witness to this period. During the Norman and Swabian period there was a great economic and cultural development. under the domination of the Aragonese great changes were made in the city. Between the end of the ‘700 and the beginning of the nineteenth century, Palermo was the city of the hundred countries where the villages grew, an expression of an economy of the territory in continuous relationship with the city. Today the Historic Center of Palermo is divided into four lines (Loggia-Castellammare, Tribunali-Kalsa, Palazzo Reale and Monte di Pietà-Capo) linked to the two historical arteries of the city: the Cassaro and via Maqueda, road perpendicular to the first and at the intersection with this, it creates the Quattro Canti di Città square